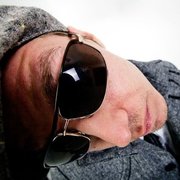 Will Nemesis Approach Earth From the Constellation Orion?

I'm about to show you something amazing. What you are about to see is either the biggest run of coincidences, or, our Nemesis will be coming from Orion.

To start out this quest, we are going to have to take a trip in time all the way back to December 30th, 1983. On that that day The Washington Post revealed to the public that NASA had found something of great significance.

In the article titled "Orbiting eye reveals mystery space monster" the Washington Post describes how the IRAS telescope has found something as big as planet Jupiter on the western edge of the constellation Orion. Here is how the article starts. 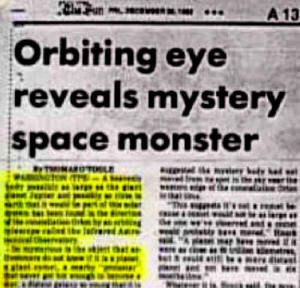 A heavenly body possibly as large as the giant planet Jupiter and possibly so close to Earth that it would be part of this solar system has been found in the direction of the constellation Orion by an orbiting telescope aboard the U.S. infrared astronomical satellite.

The mystery body was seen twice by the infrared satellite as it scanned the northern sky from last January to November, when the satellite ran out of the super cold helium that allowed its telescope to see the coldest bodies in the heavens. The second observation took place six months after the first and suggested the mystery body had not moved from its spot in the sky near the western edge of the constellation Orion in that time.

Here we have the Washington Post clearly saying that NASA has found an object on the Western edge of the Constellation Orion and that they saw it twice. I want you to remember Western Edge of Orion for later.

Then in 2009 I stumbled unto this video in which the editor claims to have found a leaked image of Nemesis. On this leaked image there is a set of coordinates.

Here is where it starts to get all strange. The kind of strange that sits in your belly like last week's enchiladas.

The story goes that a scientist uploaded a leaked video onto Youtube that showed Nemesis and its location. Soon after the video was uploaded the video was deleted and the Youtube account suspended.

That's not even the crazy part. When you put the coordinates into Google Sky to see what is there, you get something very unexpected.

The image has been blocked out by Google and guess what? It just so happens to be where? Yup, you guessed it, right on the Western edge of the constellation Orion right in line with the original article in the Washington Post.

So here we have a story published in 1983 in the Washington Post that states without a shadow of a doubt that the IRAS telescope has found an object that is as big as Jupiter and that it's on the western edge of the constellation of Orion, and that they saw it twice. You have a video that shows an image of what is supposedly Nemesis, and the exact spot where the image tells you to go just so happens to be blocked out by Google. It is THE ONLY image blocked out in Google sky.

Now we finally get to the last piece of the puzzle of coincidences, and for me personally, it's the straw that broke the camel's back. One coincidence is acceptable, two is improbable, three highly unlikely, more than three, well, you figure it out.

There is an article that has been circulating the internet about Betelgeuse going supernova and causing two suns to appear in the sky by 2012. It did not hit me until a few hours ago how significant this article is.

I bet you will never guess where Betelgeuse is located?

If you guessed in the western edge of the constellation Orion, very close to the blocked out image in Google, where the video said Nemesis was, and the Washington Post said that IRAS saw an object twice, you win the million dollar prize.

I suspect that the Betelgeuse supernova story is a cover to have an explanation for when there is an object in the sky that should not be there.

Out of the billions and billions of stars, it would just so happen to be a star on the western edge of the constellation Orion and it will happen in 2012? Do you know the odds of that? I don't, but, I will tell you it's astronomical.

I suggest you keep your eyes peeled to Orion from now on out, especially those with telescopes.

The debunkers will try and make you believe that it's just one big string of coincidences, just like 9/11. You believe what you want, I know what I believe.

Will the Earth Have Two Suns by 2012?
By: William Lee Adams

In the Star Wars saga, George Lucas imagined a world where twin suns rose and fell in the horizon. Looks like his vision may not be so far-fetched.

Astrophysicists say that Betelgeuse, the red super-giant that is the ninth brightest star in the sky, is losing mass—an indication of gravitational collapse. Brad Carter, a senior lecturer of physics at the University of Southern Queensland, explained to news.com.au that the star is essentially running out of the fuel at its core. “This fuel keeps Betelgeuse shining and supported. When this fuel runs out the star will literally collapse in upon itself and it will do so very quickly,” he said. The subsequent explosion will appear tens of millions of times brighter than the sun, meaning 24-hours of light on Earth.

Watching a show on the History Channel called "The Nostradamus Effect" and they are talking about the ancient Egyptians and their belief in a cyclical event and low and behold what they said next blew me away. Orion Again! You have to see for yourself...start the video at 1:30

Below are two images showing the constellation of Orion, the location of Betelgeuse, and the image that has been blocked out of Google sky. 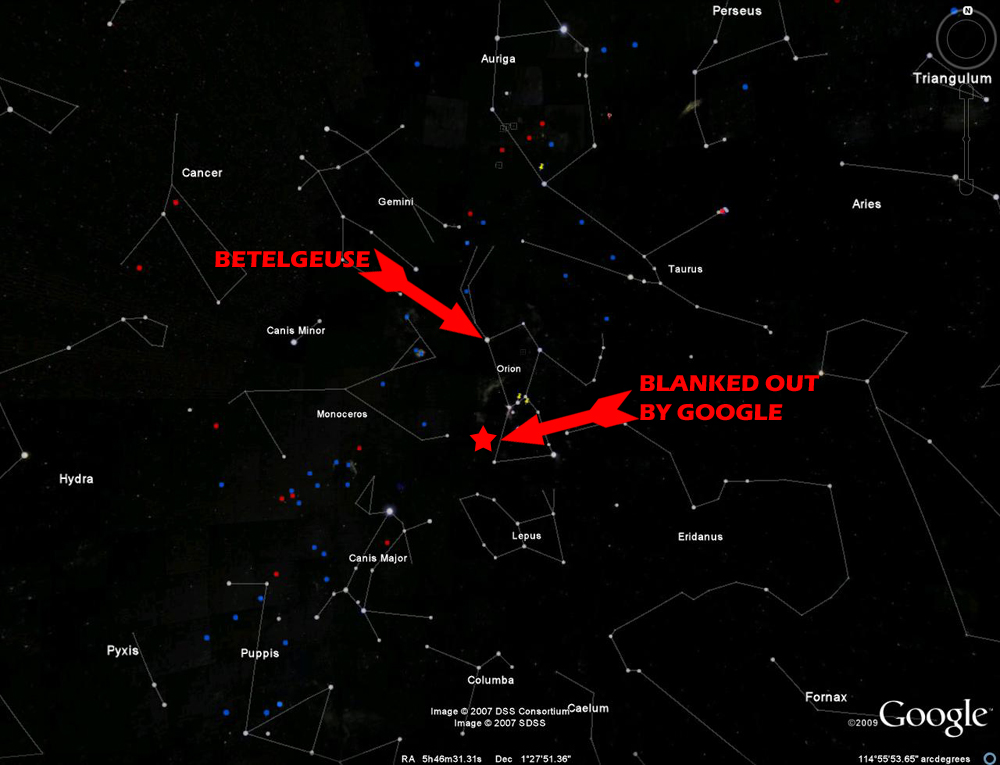