Over the course of the past few months residents from around the world have reported and videoed strange trumpet like sounds which seem to be coming from the sky. What is concerning is the huge increase this past week.

Others have recorded large booming noises that sound eerily similar to each other. Below are several videos of both types of noises.

You can clearly see in this video the dog is bothered by the sound. This top video here is the spookiest one I have seen to date.

Dramatic Increase in Google Searches for the Term "Strange Sounds"

I decided to do a Google Trends search to see if these strange sounds would be reflected in Google searches. Google Trends gauges what people on the internet are typing into the Google search engine. I searched the term "Strange Sounds" and was shocked to see a HUGE increase over the past 5 days in internet searches for that term.

Here is the link to the Google Trends report.

Here is a screen shot of the trend I took just in case it "Magically" changes. 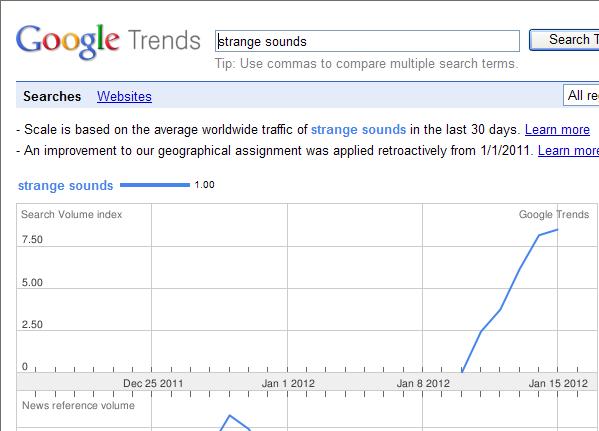 Story on Reddit About the Strange Sounds Goes Viral

Many people are apparently hearing these strange noises as reflected here in this recent story on the popular site Reddit that has gained some internet steam in recent days.

Youtube user dutchsinse has put out a very good compilation video of many of the sounds. Some are lower in volume but some are much louder.

Strange BOOMING Sound Heard in Both Costa Rica and Colorado

Here is a video taken a few days ago from Coast Rica which is very similar in nature to a video taken in Colorado a few months ago right when those big earthquakes happened there.

Here is the video of the loud booming sound heard in Colorado a few months ago.

Strange Sounds and the Dogon People

The Dogon people are a tribe that retains ancient knowledge of the cosmos and reflects that understanding in various rituals. They speak of a Dark Star, invisible to the human eye, that decides the ebb and flow of life on Earth.

The Dogon people consider the humming sound of the Bullroar to be the VOICE OF THE DARK STAR. The hum of the Bullroar sounds eerily similar to the recent strange sounds that have been reported all over the world for the past few weeks.

When you combined the Dogon's voice of the dark star, with the Egyptian Papyrus Ipuwer, and the Kolbrin Bible's description of noises, and the Christian Bible's trumpets, past and future, it starts to form a picture. Remember it was the sound of great trumpets that supposedly knocked down the walls of Jericho.

"Forsooth, the land turns round as does a potter’s wheel. The towns are destroyed. Upper Egypt has become dry. All is ruin! The residence is overturned in a minute. Years of noise. There is no end to noise."

Manuscripts 3:6 The people will scatter in madness. They will hear the trumpet and battle-cry of the DESTROYER and will seek refuge within dens in the Earth.

Creation 4:6 THE STAR grew and waxed to a great brightness and was awesome to behold. It put forth horns, and sang, being unlike any other ever seen

Here is a short documentary about the Dogon people and their worship of the dark star. Pay special attention to 2:20 into the video where they talk about the voice of the dark star. The sound of the Bullroar sounds a lot like the current strange sounds being reported these days.

How could the Dogon people know about an invisible star that's light years away? Maybe they are not talking about a star in another solar system but one right here in a binary orbit with our Sun. Another point to note would be how would a star light years away have any influence on life on Earth? I think they mean something much more local.